Getting started on the summer wardrobe...

Actually, I'm finishing off last years summer wardrobe attempt first, then getting started. I'm on 2 weeks annual leave at the moment for the school holidays (in the middle right now). The first 3 days were slow as the Little Miss came down with a virus/bug of some sort, and spent 3 days on the couch. she's still not 100% but starting to get back into her activities she'd planned. You would think I got a lot done in those 3 days, but no. being nurse/Mummy came first, but the house is looking pretty tidy for a change!

I decided to be completely selfish and only sew things for me! I didn't even know about this when I decided! But I had a backlog of stuff I'd cut out and never gotten too, or started and not finished (known as UFO's or 'unfinished objects' in the sewing world). I'd also made a few things recently that needed adjusting, in particular waistbands (taking in, which is always nicer than letting out!). Boring jobs though.

This particular maxi dress was cut out and started last year- as in last summer. I've made it before, too. Don't know whats happened to that dress, possibly tossed during a non fitting stage. I think there was another dress out of it, but I don't have that one anymore either! Anyhow, it's now spring, nearly summer again. I cut it out as per measurements, a size 18 apparently, and it was mahoosive on me! I had to check and remake the bodice- I'd gotten the fabric quite cheap at Spotlight and bought more than I needed, luckily.

I took the chance on the sunny afternoon this afternoon for a dress up- not realising it was so windy! No, not pregnant, just look it!

Ooh, the moon glow! It was a long, dark winter hehe. 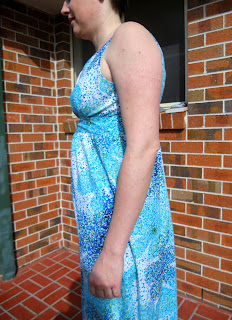 I'm not 100% happy with how it fits around the boobies, but I think it will depend on the bra I'm wearing with it. Which on hot, at home days will probably be none anyway! I don't think it's too sheer for a voile, either, but if anyone comments when I'm wearing it I can whip up a lining. 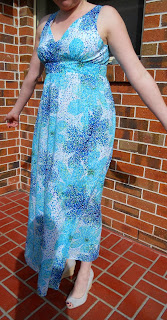 Oh, WORST PHOTO EVER alert. Can you tell Miss 9 was grumpy and tired and didn't want to take pics? She neglected to tell me I look like He-man from the back! Grrrr.... 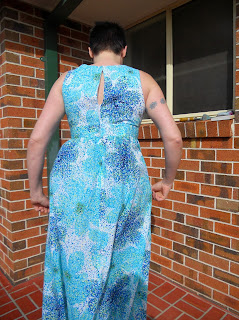 And I am nearly all prepared for spring with a pedicure yesterday, and haircut today. It's getting shorter and shorter, I think... 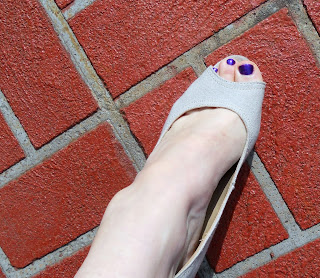 So once I'd gotten that UFO out of the way, I started on a new purchase (once again ignoring the precut pile hehe). I wasn't 100% sold on this style on me from the original pics, but once I saw lots of different versions I thought I'd give it a try. I even had this op shopped rayon-ey stuff to try it on. Horrid but like able at the same time! 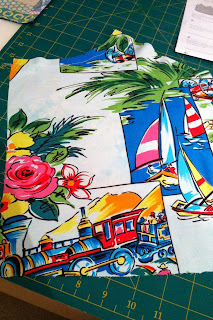 It looks terrible on the hanger- but like all of Tasia's pattern, amazing when on! 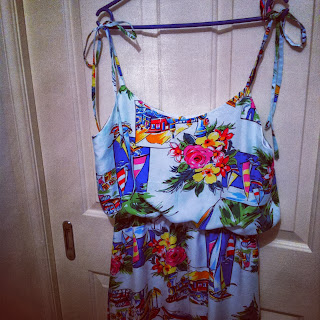 Even a quick check late at night got me excited! 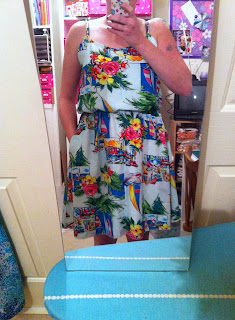 Yep, Murray agrees. Always in for a photo bomb, that dog! 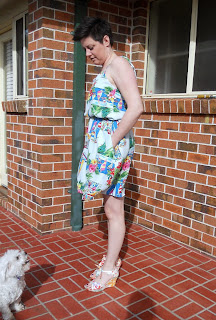 It feels so good on! I didn't retie the straps, which is why the bra straps are showing I think, because the other try on times this didn't happen. I didn't put the zip in, as I read that many people didn't and it still went on easy, which is true. But then I didn't know how to finish the blousy bit at the back, I'll be hunting for a tutorial on that bit, or working on it a bit better next time. 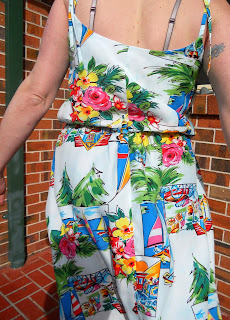 It's going to be a 'wear with caution' on a windy day! Must remember clean knickers that day hehe. I had enough fabric to make the maxi length, but the fabric wasn't wide enough, so I have a little left over, maybe a tank top for summer or something. 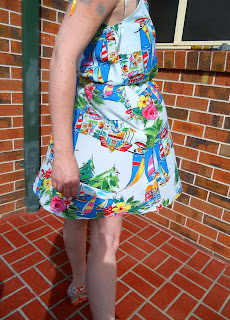 And the cute shoes with this frock- my fave platforms I picked up years ago op shopping with Ms Curlypops! They're getting me excited about warmer weather- I just wish the warmer weather was excited enough to stick around longer than 3 days! 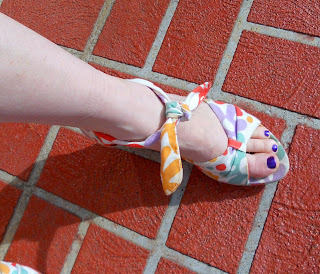 My totally Selfish Sewing was of course interrupted by Henry needing a new hat- a quick one was whipped up from Nikki's book, as his head is finally big enough! Some more of the unknown mystery fabric that just goes well as anything, with a cute Spotlight print. I'll be adding straps once I measure it on him to get the placement right. Totally cute! 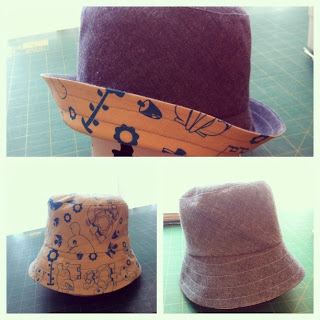 I love those dresses!

We're on the same path, Bec. I made baby hats yesterday and today, and tonight I'm making summer dresses. 'Tis the season, it appears!

i love the dresses too, nice work bec