In between the kiddy stuff, I've been (slowly) making the Alma blouse. It was a bit spooky, as I was watching American Horror Story Season 2 whilst I made it, and there was a character named Alma....so I wont forget that show very quickly!

These pics are after 2 days of wearing...it's THAT good!

It has a side invisible zip, and I took in the side seams and made the darts a bit bigger, I cut a 14 out. It actually goes over my head without the need for the zip, so as good as that was to put in- I'm not doing it next time! 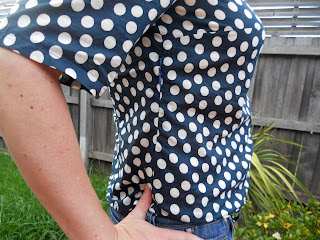 It's great for casual, but I can't wait to dress it up a bit. But the cuuuute collar is my fave, I think a Peter Pan collar dresses everything up! I have a few fabrics in the stash earmarked for more... 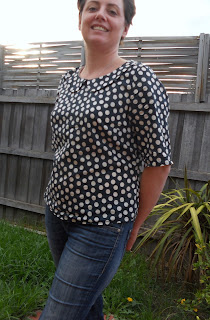 The only things I didn't like were my own fault- I didn't have enough fabric to make the facings match- I went with white, which I can see and it bugs me. Should've gone with navy! (it looks black and white, but it's a navy and cream voile from Spotlight). The other thing is a flaw in the fabric, down the back shoulder is a line where there is no blue dye- but Cam suggested a fabric marker, if I was really worried about it! I'm not, just annoying! 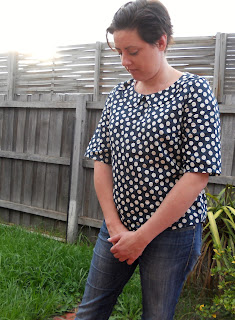 Hmm, the kid is getting a bit better at photos!

Very stylish. the print and colours are lovely. Paired with pearl earrings and bracelet would dress it up.
What type of fabric did you use?
x

It looks great. Love the fabric choice. I need to make myself a few tops, I think.

Ooh, how about the next one with a contrasting collar. It really suits you.