I got stuck into the spring cleaning yesterday, the beautiful weather gave me lots of reasons too! And I got about to this little project.....
Armed with a curtain thingy I've had in the drawer for yonks, I set up a design wall, similar to what I used at Sewjourn. This of course has to be temporary as I rent. 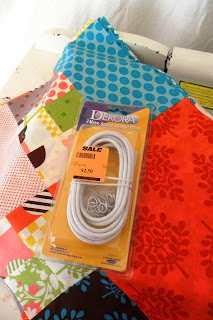 I made teeny tiny holes in the wall (later thinking to use Command adhesive hooks, doh!) 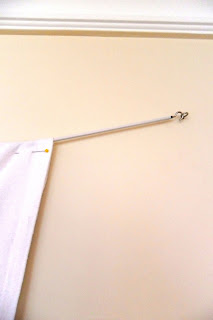 and pinned a queen size flannelette sheet to the curtain line (I tore a bit off the edge of the sheet, there was no measuring in any part of this, though!) 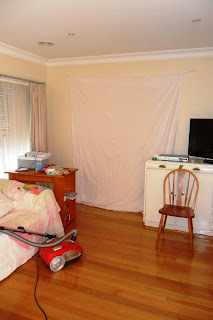 I then layed out some pre-prepared blocks to see if it worked, and.....VOILA! It can be taken down and you wouldn't know it was there in between the quilt sessions. 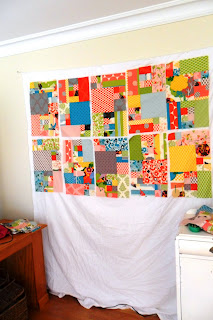 Also on the weekend, I snapped this pic of my cat checking out the old iron on the bench! She had been sleeping on one of the chairs, but curiosity took over...I thought it was going to get hissed at! Hilarious! 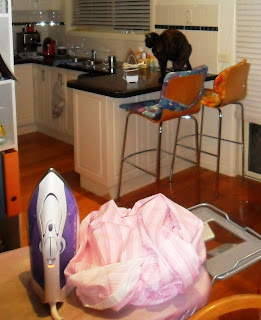 Yes, that's the sexy new iron in the front, mmmm, Sunbeam! Lets see if this has any guts! It has auto-shut off, which is very important with my memory....(and I got it at the factory outlet, won't tell you what a bargain it was!)
Posted by bec at 7:00 PM

Fabulous design wall and it works so well!! Yep, an auto shut off iron is a must here too! xo

Your 'Hoot' blocks are looking fabulous!

Great idea! I seriously need to get myself one of those irons. Maybe I'll pop into Sunbeam next week.

I want to get myself to that factory outlet - not for an iron, but for a nice new coffee machine. One day.

That is brilliant, how you've attached your wall. Love it. Som much nicer than my thumbtacks.

Love those blocks too.

Hey I'm looking for a new iron can you let me know how your new one goes? I've had my Mum's cast off for something like 15 years, it gets hot but does not steam and I am tired of looking for the spray bottle, which the kids nick off with all the time.

Your design wall looks great, it is sure to come in very handy!

Hooray for sunshine, and getting things done!

The quilt blocks look great. I must get my own design wall sorted out. I've got the sheet, just haven't gone as far as finalising the hanging-up bit.

Design wall looks great! Glad all our ideas worked. Can't wait to come over and try the new iron, I'm going to have iron jealousy! Get sewing on those Hoot blocks, I'm waiting to see them finished!