I haven't felt the need to urgently blog for a while, but I want to share this pattern with everyone! It arrived nice and quickly on Monday after I bought it from here; and that wasn't very long after it was released by Tasia.

I have been DYING for a good PJ pants pattern forever, the commercial patterns I have I think are aimed at people with nappies- saggy bums! and low crotches. Anyone else noticed this? So to say I had high hopes is an understatement! 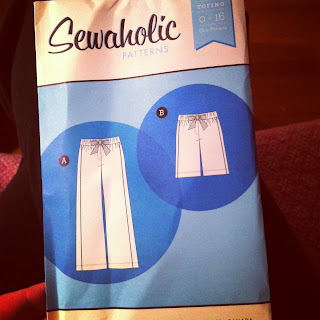 The first pair was a muslin- and I hoped wearable. I used some vintage flannel from the stash. I cut a straight size 10 (I went with the hip measurement, not the bust or waist) and did recommended seam allowances etc. I left the piping off the trial pair. And I LOVE THEM!

Sorry about the bad iPhone pics- I was so excited when I got home I got the mini photographer to snap some pics! The thick flannel was going to annoy me around the waist I thought (nothing like feeling slim in your bedroom/ lounge attire!) I used some ribbon from the stash. 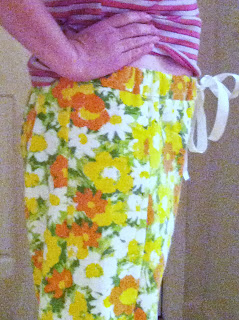 They sit on the hip more than the waist, and have a normal sized crotch and butt! Yippee!

I have the next ones cut out- and these will include the piping, my first time making and using it!. I'll be in time for the pajama party! 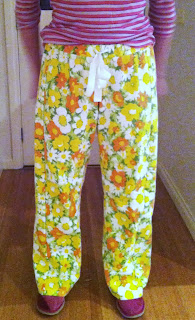 I think I'll be making a lot of these- summer, winter, shorts, and as tracksuit pants too. I wonder if I can match my Renfrew count? Six new ones last weekend, which I think takes my count to 12? These were all made with leftover fabrics too from other garments (expect the bottom left striped merino, it was just taken in a lot, but I count it as a new one!) 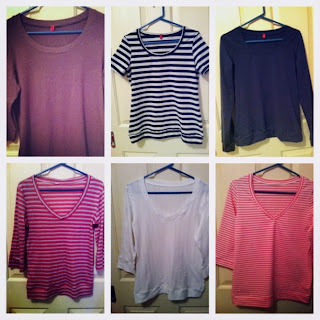 Perfect PJ's!! I may have to join you for the pyjama party, sounds fun!

I just LOVE the fabric. So cheery!

Good to know now that there is a good PJ pattern out there. I want to make some too, but I'll wait till it is my winter time I think!

I LOVE those pants!! Definitely need some new PJs ... actually my whole family does!