I just had a look back, and I don't think I blogged about my keepcup! I got the one on the left for my b'day in November, and I used it religiously for a few weeks. Then it became all too hard- here's why.
My coffee order is 'strong latte'. No, I don't want a long black with milk; nor a strong flat white. Strong latte is me. So when I gave them the (medium) keepcup, the strong factor was missing; they still put a double shot in the cup, it was just drowned out by extra milk. Extra milk I didn't want or need! I started asking for less milk, which then meant I had to remember to ask, and what is the point of a regular coffee haunt where they know your order if you have to tell them everyday?
So......
I stopped using it. Back to paper cups. Coffee was good. Environment wasn't. Guilt setting in.
Until I stopped into the Green Collective today and bought the small!! Cute, isn't it? 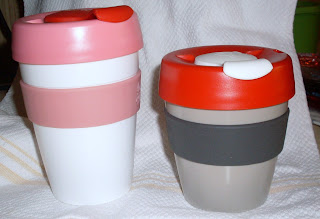 and I can change the colours around! 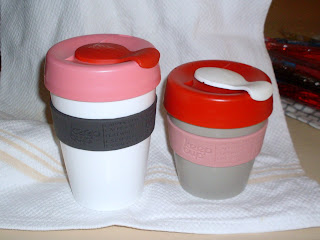 So I think this has solved the problem. Apparently the large keepcup is the size of a milkshake cup? May need that for my iced coffees.
My new coffee haunt has just opened, a great barista has finally opened a juice/smoothie/coffee place called liquid. Check it out! The best in the 'ville.

I really need to get myself one of those for market days. Thanks for the heads up, I'll be getting a small for sure. I hope you are having a great weekend. X

Oh yes we need to get our coffee just right and now please !

i love these! i just ordered a small one and a medium one so i can mix and match sizes and lids. my coffee is a strong latte too, but i'll probably make it at home and take it to school drop off! thanks for sharing!