I saw on an SBS ad last week that this is starting tomorrow night; 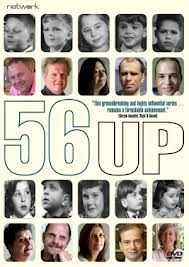 I only came to know about these shows a few years ago, I didn't hear much about them growing up- but then, I was never into doco's much as a kid or teenager! Adulthood does cool things to you sometimes.

The benefit of coming to them late was not having to wait 7 yrs to see what's happened next! There are a few people on their I really like, and hope they are doing OK, others that bug me a bit, but that's what fascinating about it, I think!

I re watched a bit of 42UP last night, and all of 49UP today (they do a lot of flashbacks, so you don't necessarily have to watch the whole series to pick it up, in my opinion.)

I have a general fascination with reality TV, I know there are lovers and haters of it, but I think some modern reality shows are loosely based on the impact a really good documentary has on you. This series has me thinking a lot about my own life, like if I was followed around every 7 yrs where I would be, what have I achieved etc. And the fact these kids were put forward by the school, they had no choice in the matter of being on the program, they wouldn't have known the impact on the kids back then etc.

As I said, fascinating.

Dave and I LOVE this series. He introduced me to them way back - probably about 20 years ago (that makes me feel/sound really old!!) and we have waited for each new one to come out.
One of the guys lives in Aus, Boronia I think.
The impact on their lives has been huge - I remember feeling so sad to see Michael changing from that bright eyed boy who wanted to be an astronaut into the aged, depressed homeless man of 28 (or 35??). It was great to see him back on his feet, looking forward to 56.
I'm a sucker for Survivor too - oh and Amazing Race...

Thanks for posting this, Bec, because I hadn't seen the advertising. The last few episodes have been released in cinemas rather than going straight to TV, so I wonder what happened this time? Anyway, I've just set it up to tape tonight.

I've loved this series since I first saw it when they were 21 and I was studying sociology. They are almost the same age as me, so it has been great comparing their lives with mine.

I've found this series fascinating too!
I remember seeing some of it in England years ago and its been so interesting seeing these people again.

I am glued to this programme whenever it comes out. Watching those 50's and early 60's childhoods in the flashbacks gives me goosebumps. Such open little faces.... their world at their doorsteps... such struggles to come. ...cant wait for tonight!

It was Neil, not Michael that fascinated me!! Watching now, waiting to see what he's doing at 56....

Hi Bec, first time commenter long time reader here. I was introduced to this series during my vce and have been following it since. I love that sort of thing. There is a series that has just aired on abc called life at seven which follows ten or so australian children trying to answer the question of what gives a child the best start in life. The life series is still on I view and top quality. And since we're on the subject My Transexual summer is also intriguing.

I've only seen the first couple as they we had to watch them in class back in the day!
Enjoy